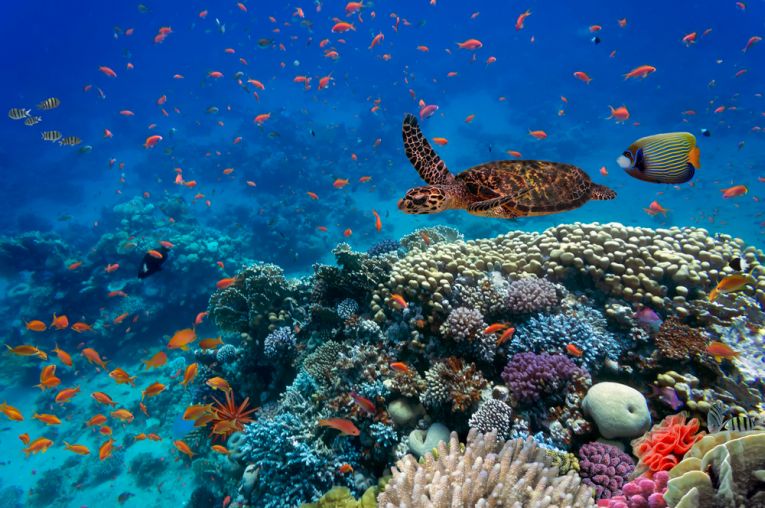 This variety of nature is known as biological diversity or biodiversity. Biodiversity is a lot more than just the number of different plant and animal species.

Variety of Life. This refers to the diversity of life from genes, the genetic building blocks of life, to Blue Whales, the largest animal that has ever lived, to large ecosystems, such as the Great Barrier Reef.

While many people think about this variety in terms of the number of species, it also includes the genes that make up the species, and the ecosystems they form. These three levels: species diversity, genetic diversity and ecosystem diversity, are explained below.

Web of Life. This refers to the connections that bind all living things. Many species depend on each other for their survival. For example, many plants rely on insects to pollinate them, while many animals (such as the koala) feed only on a few special plants.

THE THREE LEVELS OF BioDIVERSITY

Species diversity is the variety of plant and animal species in a given region. It is the most common way people think about biodiversity.

Scientists estimate that Australia has over 1 million different species. These range from tiny algae to humpback whales, from zoo plankton to towering eucalyptus trees. Our scientists have very limited knowledge about the species that live here; about 850,000 of them have yet to be classified.

Our knowledge about the number of species that live on Earth is even more vague. Estimates range from 5 to 30 million or more, though one well accepted estimate is 13.6 million. Scientists have only classified about 1.7 million species so far.

Genetic diversity is the variety of genes within species. Individual genes are the most basic unit of biodiversity. Made up of DNA sequences on chromosomes, genes encode information templates for specific body functions and characteristics. The different shape, features and colours among dogs, or the different hair and eye colour in humans are examples of genetic diversity. Genetic diversity also produces easily seen differences in many native Australian species, such as the White cheeked Rosella, which have yellow head plumage in north Queensland, red head plumage in southern Australia, and black head plumage in Northern Territory.

The total number of different genes distributed among Australian species is unknown but thought to be in the millions. The total number harboured by all species on Earth is estimated to be 10 trillion (109). The number of genes contained by different groups of species varies a great deal. Bacteria have about 1000 genes, some fungi about 10,000, and a typical mammal around 100,000. The group of species that have the greatest number of genes are not primates (which include humans), but flowering plants whose species often have over 400,000 genes.

The number of different ecosystems in Australia is thought to be in the hundreds.

National Strategy for the Conservation of Australia’s Biological Diversity definition of biodiversity:

“The variety of life forms: the different plants, animals and microorganisms, the genes they contain, and the ecosystems they form. It is usually considered at three levels: genetic diversity, species diversity and ecosystem diversity.”